The deer mouse (Peromyscus maniculatus) is one of the most numerous organisms of the biotic community not only of our Nature Trail but also of almost any woodland ecosystem throughout North America. It is altogether possible, though, that even an extremely observant visitor to an ecosystem inhabited by deer mice might never actually see one of these incredibly abundant and extremely interesting animals. 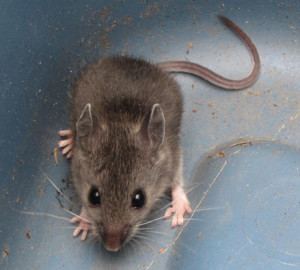 The deer mouse is small. An adult’s body is only 3 or 4 inches long with a tail of comparable length. Deer mice move about on the forest floor beneath the concealing cover of the leaf litter, and they nest in well hidden burrows, rock crevices, brush piles, and tree holes. Their dorsal (“back”) coloration is a camouflaging brown, and to add a final emphasis to their cryptic habits and habitats, they are primarily active at night. It is not surprising, then, that they are so seldom noticed or observed.

The name “deer mouse” comes from their color patterns. They have a tawny brown back, a white underbelly, and white legs and tails. Their colorations resemble that of the white-tailed deer. The woodland form of the deer mouse is slightly larger than the prairie form, but both have similar colors, hind legs that are longer than the forelegs, large eyes, large ears, and long, thin tails. The deer mouse is found throughout western North America (from Alaska and Canada in the north to central Mexico in the south), and across the Great Lakes region through Pennsylvania up into New England. They inhabit woodland ecosystems, grasslands, alpine regions, cultivated fields, brush lands, and will even enter and nest in buildings and homes.

The nests of the deer mice are typically lined with soft, padding and insulating material (including moss, dried grass, rabbit fur, leaves, feathers, etc). A nest may be inhabited by a family group of deer mice that can consist of the parents and several of their young. Over the course of a year, a family of deer mice may utilize several nests, typically abandoning a nest after it has become fouled with feces and waste. Deer mice also make “larder” nests outside of the entrances to their living nests in which gathered foodstuffs are amassed for use when food resources are limiting.

Deer mice omnivorously take a great variety of specific foods. They gather and eat insects (mature and immature), a wide variety of other invertebrates, seeds, fruits, grains, fungi, flowers, and nuts. A significant percentage of the gathered food may end up in their larder nests for winter consumption.

Deer mice can live up to five years in captivity but probably only live about a year in the wild. This shorter natural life span is primarily due to the very large number of predators that take and consume deer mice. These predators include foxes, coyotes, snakes, owls, hawks, and many other species of birds. In the absence of these predators, deer mice populations can become explosively large leading to serious environmental damage and degradation.

Deer mice become sexually mature at five or six weeks of age. A female deer mouse can have up to eleven litters of one to nine young in a year. The average gestation time for each litter is 24 days. The litter size increases until the fifth or sixth litter and then declines. The young are tiny (1 or 2 grams) at birth. They are weaned in four weeks and then capable of reproducing in just another week. Litter size and frequency increase when food resources are abundant, thus allowing this species to exploit often transiently available resources very rapidly.

Deer mice are involved in two diseases that affect humans: Lyme disease and hantavirus. Lyme disease is caused by a spirochete bacterium that is transferred between mammalian hosts (including deer mice, rabbits, white-tailed deer, and humans) by the very small deer tick, Ixodes dammini. A human with Lyme disease often experiences a skin rash, a transient flu-like syndrome, and may develop recurring arthritis. Hantavirus is found in the urine, feces, and saliva of infected rodents including deer mice. Inhalation of dust containing these viruses can lead to very serious viral infections in humans (symptoms of hantaviral infections include headache, fever, and severe respiratory distress). Half of those people infected with hantavirus die from the disease.