Customer Preparation Checklist For The Control Of Bed Bugs

All members of the bed bug family feed on the blood of birds or mammals. The bed bug, Cimex lectularius, attacks man, as does the Eastern bat bed bug, Cimex adjunctus. Bed bugs are active only at night, usually just before dawn. During the day, they hide in cracks and crevices in walls, floors, beds, and furniture. When only a few bed bugs are present, they live close to human sleeping areas; when numerous, they can be found in many rooms of the house. A characteristic “bed bug odor” is frequently present in a home infested with bed bugs. 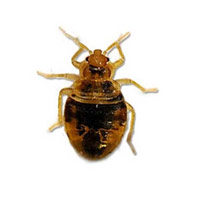 Bed bugs are oval, chestnut-brown insects and are flattened from top to bottom. Adult bed bugs (Fig. 1) measure about ¼ inch in length. The mouthparts are shaped into an elongated proboscis, which, when not in use, is held directed backward underneath the body. When a bug is ready to feed, the proboscis is extended forward and the stylets within are thrust into the skin of a host. Mated female bed bugs deposit their eggs in their resting places. One female will produce about 345 eggs during her lifespan.

The bugs grow by molting several times. Nymphs look very much like the adults, except they are smaller and not sexually mature. There are five nymphal molts, and each nymph must have a blood meal to be able to molt to the next stage. Adults feed once a week on average but feed many times during their four-month or longer lifespan.

It is common for bed bugs to come into a home via secondhand articles and furniture. They may also migrate between homes via wires, plumbing, or rain gutters. In addition, since warehouses, trucks, and railroad cars may be infested, common bed bugs can infest homes by stowing away on new furniture stored or shipped from these places. People frequently carry the bugs home in luggage from infested hotels and vacation rentals.

The Eastern bat bed bug comes into homes in the spring with colonies of bats. They can be found in the living quarters of homes in many of the same places as common bed bugs, but the source of the infestation is located within walls or attic areas.

Despite the fact that the bed bug can acquire many human disease organisms during feeding, there have been no documented cases of disease transmission as a result of bites. However, their bites can produce irritating, itching, and burning sensations. Bed bugs feed rapidly, becoming engorged in less than ten minutes. The act of biting is usually not felt, but later there is an allergic reaction to the protein found in the bed bug’s saliva. A colorless wheal or lump develops at the bite location; in contrast, flea bites have reddish centers. Discomfort from bed bug bites may last a week or more. Occasional bites indicate a beginning light infestation of adults; many bites result from a heavy, long-standing population of nymphs and adults.

It is not advisable for homeowners to attempt to treat for bed bugs. Most of the necessary insecticides are only for sale to and use by professional pest-management companies. If homeowners try to control these bugs with over-the-counter products, the bed bugs likely will become dispersed, resulting in a more difficult treatment required at a later date.

Bed bugs become established in structures when they hitch a ride in boxes, baggage, furniture, bedding, laundry, and in and on clothing worn by people coming from infested sites. Poultry workers can carry bed bugs to their residences from their places of work. Bat bugs, poultry bugs, swallow bugs, and others are typically transported to new roosts by the principal host. An accurate identification of the bed bug species involved is essential to an effective control strategy. Many control failures can be traced to an incorrect identification.

Bed bugs hides in cracks, crevices, and seams during the day. They prefer narrow crevices with a rough surface where their legs and backs touch the opposing surfaces. Bed bugs have difficulty climbing polished glass surfaces. Wood and paper surfaces are preferred to either stone, metal, or plaster; however, in the absence of preferred sites or during high population numbers, the latter will also be utilized. The aforementioned cracks and crevices should be filled with appropriate fillers, such as caulking.