From Wikipedia, the free encyclopedia

Fire ant is the common name for several species of ants in the genus Solenopsis. They are, however, only a minority in the genus, which includes over 200 species of Solenopsis worldwide. Solenopsis are stinging ants and most of their common names reflect this, for example, ginger ants and tropical fire ants. Many species also are called red ants because of their light brown color, though species of ants in many other genera are similarly named for similar reasons. Examples include Myrmica rubra and Pogonomyrmex barbatus.

None of these names applies in all countries nor to all species of Solenopsis, nor only to Solenopsis species; for example the colloquial names for several species of weaver ants in the genus Oecophylla in Southeast Asia include “fire ants” because of their red color and painful sting; the two genera, however, are not closely related. Also, Wasmannia auropunctata is commonly called the “little fire ant”. 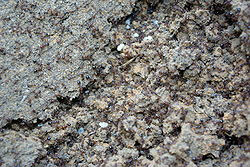 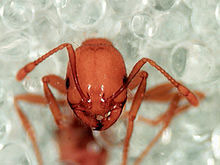 The bodies of mature fire ants, like the bodies of all typical mature insects, are divided into three sections: the head, the thorax, and the abdomen, with three pairs of legs and a pair ofantennae. Fire ants of those species invasive in the United States can be distinguished from other ants locally present, by their copper brown head and body with a darker abdomen. The worker ants are blackish to reddish, and their size varies from 2 to 6 mm (0.079 to 0.236 in). In an established nest these different sizes of ants all are present at the same time.

Solenopsis spp. ants can be identified by three body features—a pedicel with two nodes, an unarmed propodeum, and antennae with 10 segments plus a two-segmented club. Many ants bite, and formicine ants can cause irritation by spraying formic acid; myrmecine ants like fire ants have a dedicated venom-injecting sting, which injects an alkaloid venom, as well asmandibles for biting. 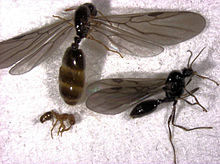 A typical fire ant colony produces large mounds in open areas, and feeds mostly on young plants and seeds. Fire ants often attack small animals and can kill them. Unlike many other ants, which bite and then spray acid on the wound, fire ants bite only to get a grip and then sting (from the abdomen) and inject a toxic alkaloid venom called Solenopsin, a compound from the class ofpiperidines. For humans, this is a painful sting, a sensation similar to what one feels when burned by fire (hence the name) and the after effects of the sting can be deadly to sensitive people. Fire ants are more aggressive than most native species and so have pushed many species away from their local habitat. One such species that Solenopsis ants parasitically take advantage of are bees, such as Euglossa imperialis, a non-social orchid bee species, from which the ants would enter the cells from below the nest and rob the cell’s contents.[8] These ants are renowned for their ability to survive extreme conditions. They do not hibernate, but can survive cold conditions, although this is costly to fire ant populations as observed during several winters in Tennessee, where 80 to 90% of colonies died due to several consecutive days of extremely low temperatures.

Fire ants nest in the soil, often near moist areas, such as river banks, pond shores, watered lawns, and highway shoulders. Usually, the nest will not be visible, as it will be built under objects such as timber, logs, rocks, or bricks. If there is no cover for nesting, dome-shaped mounds will be constructed, but these are usually only found in open spaces, such as fields, parks and lawns. These mounds can reach heights of 40 cm (16 in), but can be even higher on heavier soils, standing at 1.0m in height and 1.5m in diameter. Colonies are founded by small groups of queens or single queens. Even if only one queen survives, within a month or so, the colony can expand to thousands of individuals. Some colonies may be polygynous (having multiple queens per nest). 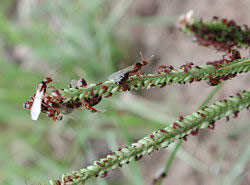 Fire ant queens, the reproductive females in their colony, also are generally the largest. Their primary function is reproduction; fire ant queens may live up to 7 years and can produce up to 1,600 eggs per day, and colonies will have as many as 250,000 workers. The estimated potential life span is around 5.83 to 6.77 years. Young, virgin fire ant queens have wings (as do male fire ants), but they rip them off after mating.

Males mate with the queen. They die immediately after mating.

There are other types of roles in an ant colony like the workers and the soldier ants. The soldier ants are known for their larger and more powerful mandibles while the worker takes care of regular tasks (the main tasks in a colony are caring for the eggs/larvae/pupae, cleaning the nest, and foraging for food). However, Solenopsis daguerrei colonies contain no workers, as they are considered social parasites.

Although most fire ant species do not bother people and are not invasive, Solenopsis invicta, known in the United States as the red imported fire ant (or RIFA) is an invasive pest in many areas of the world, notably the United States, Australia, China and Taiwan. The RIFA was believed to have been accidentally introduced to these countries via shipping crates, particularly with Australia when they were first found in Brisbane in 2001. These ants have now since been spotted in Sydney for the first time. They were believed to be in the Philippines, but they are most likely to be misidentified for Solenopsis geminata ants.

In the US the FDA estimates that more than US$5 billion is spent annually on medical treatment, damage, and control in RIFA-infested areas. Furthermore, the ants cause approximately $750 million in damage annually to agricultural assets, including veterinarian bills andlivestock loss, as well as crop loss. Over 40 million people live in RIFA-infested areas in the southeastern United States. about 60% of people living in fire ant-infested areas are stung each year. RIFA are currently found in humid southeastern USA states including parts of Texas, Louisiana, Mississippi, Alabama, Georgia and Florida.

Since September 2004 Taiwan has been seriously affected by the red fire ant. The US, Taiwan and Australia all have ongoing national programs to control or eradicate the species, but, except for Australia, none have been especially effective. In Australia, there is an intensive program costing A$175 million, although the fire ant had remained despite efforts. By July 2013 multiple sites west ofBrisbane were confirmed, including the Lockyer Valley, Muirlea and Goodna. According to a study published in 2009, it only took seventy years for the lizards in parts of the United States to adapt to the ant’s presence – they now have longer legs and new behaviors that aid them in escaping from the danger. 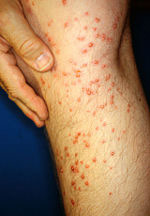 The venom of fire ants is composed of alkaloids derived from piperidine (see Solenopsis saevissima). Some people are allergic to the venom, and as with many allergies, may experience anaphylaxis, which requires emergency treatment. Management of an emergency visit due to anaphylaxis is recommended with the use of adrenaline. The sting swells into a bump, which can cause much pain and irritation, especially when several stings are in the same place. The bump often forms into a white pustule, which can become infected if scratched, but if left alone will usually flatten within a few days. The pustules are obtrusive and uncomfortable while active and, if they become infected, can cause scarring.

First aid for fire ant stings includes external treatments and oral medicines. There are also many home remedies of varying efficacy, including immediate application of urine or aloe vera gel, the latter of which is also often included in over-the-counter creams that also include medically tested and verified treatments. External, topical treatments include the anesthetic benzocaine, the antihistamine diphenhydramine, and the corticosteroidhydrocortisone. Antihistamines or topical corticosteroids may help reduce the itching and will generally benefit local sting reactions. Oral medicine include antihistamines. Severe allergic reactions to fire ant stings, including severe chest pain, nausea, severe sweating, loss of breath, serious swelling, and slurred speech, can be fatal if not treated