The Norway Rat is a large rodent, growing up to 18 inches long, including the tail. Males are larger than females. The rat’s color is grayish-brown with a pale gray belly. Ears and tail are bald.

Norway Rats are found anywhere there are people. This rat, originally from Asia, has followed people around the world, and it is now found throughout the United States. Common places Norway Rats live are ditches, basements, sewers, old buildings, barns, dumps, woods, fields, ponds, and marshes.

Norway Rats are almost always found near water. They are very good swimmers and climbers.

A rat pack hunts together, breeds together, and defends the burrow together. 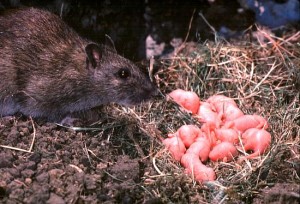 Rats breed often and each female may have seven litters in a year. Each litter has 2 to 14 young. A rat is full grown in about four weeks. Rat nests are made of leaves, twigs, and trash.

Rats are very good at catching fish with their paws. They will also eat carrion (dead animals).

The main food of rats, though, is supplied by people. Norway Rats will eat anything that is edible from human garbage. They often build their burrows where they know there is a reliable human trash source nearby. This is why places with lots of people, especially cities, also have lots of rats.

Like most rodents, these rats cache their food. This means they store it in piles in some of the chambers in their burrows.

Norway Rats will swim, climb, and even crawl across telephone wires to get to food. Rats use their very strong sense of smell to find food. They do most of their hunting at night.

Rats have many predators, including snakes, fox, skunks, weasels, owls, hawks, cats, and dogs. These predators are very important since they control rat populations.

Norway Rats disperse seeds when they eat them and poop them out in new places. This helps plants spread.

Rats also help plants grow by aerating soil. This means they put oxygen into the soil when they dig. This makes plants healthier in those areas.

Rats communicate with one another using squeaks, whistles, and chirps.