scientific name: Tetramorium caespitum (Linnaeus) (Insecta: Hymenoptera: Formicidae)
The pavement ant, Tetramorium caespitum L. is one of the most commonly encountered ants in Canada and United States. The first introduction into the United States occurred from Europe in the beginning of the 19th century. Since then, the ant has become well established and is prevalent in urban areas in the northern U.S. and parts of Canada. While the presence of pavement ants in the U.S. has been acknowledged for decades, the extent of their invasiveness and severity as a pest is not well characterized.

The pavement ant has a very broad native distribution within Europe. The pavement ant species found in Canada and United States has a wide native range in Europe, reaching from Spain to Turkey and Germany to Greece.

In North America, Tetramorium caespitum can be readily found in urban areas in Canada and northeastern United States, the Midwest, and the Pacific Northwest, and it has been found in urban areas in other states as well. Whereas it was predicted in 2008 that the pavement ant could spread to 23 other U.S. states and 5 Canadian provinces, more recent literature demonstrates that the pavement ant can already be found in nearly half of these states.

Pavement ant workers range in color from dark brown to nearly black. Workers are smaller than other castes and reach sizes of 2.75-3.2 mm. They are characterized by a head and thorax sculptured with longitudinal, parallel or concentric fine ridges (rugae), pits with unique raised rims surrounding antennal insertions, 12-segmented antennae with three-segment club, a single pair of propodeal spines, and a two segmented “waist” (petiole and postpetiole).

Head: The clypeus descends near antennae, creating a raised ridge between the antennal insertion and the mouthparts (Fig. 1C). The antennae have twelve segments with a three-segment club. Rugae (ridges) run parallel up the front and sides of the head. Mandibles have seven teeth. 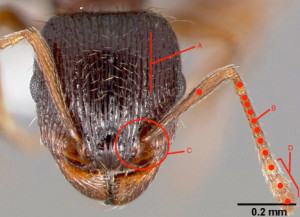 Thorax and Abdomen: The thorax is sculptured with parallel (or concentric curved) rugae (Fig. 2). A pair of spines extends from the propodeum (the first abdominal segment that is fused to the thorax). An anteroventral tooth is present on the pedicel of the petiole. The petiole and post-petiole are roughly similar in shape (boxy) and size, with the postpetiole a little larger and glossier. 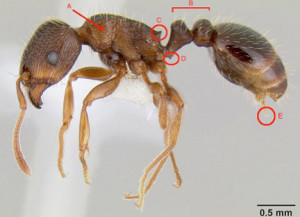 Sting: These ants have a stinger that is modified and broadened distally into a triangular ‘flag’, likely making this appendage less effective as a defensive stinger but providing more surface area for the application of trailing pheromone (Attygale and Morgan 1983) (as seen in Fig. 2E).

Pavement ants form large colonies, often containing over 10,000 workers. As with most ants, there are distinct castes: one or a few reproductive queens, and a large number of non-reproductive female workers. In early summer, winged reproductive females and males are produced. Mating occurs during nuptial flights in which alate (winged) reproductive ants leave colonies and mate in swarms. Generally, one sex predominates in the reproductives produced by a specific nest of pavement ants. It takes 42-63 days (at 21-24°C) for a fertilized egg to develop into a worker pavement ant in an established colony, although worker development occurs faster when a queen first starts a new colony.

Colonies of Tetramorium caespitum are usually monogynous – they are started by a single reproductive queen that carries out all reproduction for the lifetime of that colony – but they occasionally may have two, or possibly more, queens. The majority of nests occupy 1.2-4.8 m2 in area and are 0.45-0.90 m deep with multiple crater-shaped mound entrances per nest. Mounds near entrances are not always obvious, as they are built up after rains but slowly collapse thereafter.

Workers recruit nestmates to a discovered food source through the use of pheromones. This allows for large groups of workers to process bulky food items and bring them back to the colony. Direct homing has been documented in worker ants of Tetramorium caespitum returning to the colony with food. Based on a reference light source and an awareness of the direction and distance they have traveled, Tetramorium caespitum can calculate a direct, straight-line path back to their colony while carrying food making them very efficient foragers. Pavement ants are generalists and their diet includes arthropods, honeydew, seeds, and pollen. The average area over which a colony of Tetramorium caespitum maintains a territory in its native range was estimated to be 43 m2.

) between non-related pavement ant colonies are common in the spring and beginning of summer when the ants are developing their territories. 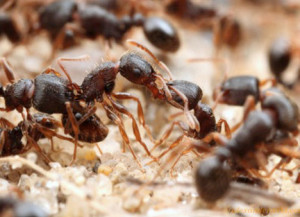 Pavement ants from neighboring colonies fight for control over territory.

Colonies of pavement ants can be found in several soil types ranging from sand to loam. Pavement ants prefer to nest in areas with minimal vegetation which makes them predisposed to favor urban habitat.

In its introduced range, Tetramorium caespitum thrives in human-modified environments. In surveys of urban environments where pavement ants are found, they generally account for most ants found at baits and around residences. These ants are also very resilient, being one of only a few species of ants found to recolonize an area after intensive human development, such as construction projects.