The ant Monomorium pharaonis (Linnaeus) is commonly known as the Pharaoh ant. The name possibly arises from the mistaken idea that it was one of the plagues of ancient Egypt (Peacock et al. 1950). This common household ant is distributed worldwide and carries the dubious distinction of being the most difficult household ant to control.

In some of the older literature this species was commonly referred to as the Pharaoh’s ant. The correct common name is Pharaoh ant, as determined by the Committee on Common Names of Insects of the Entomological Society of America (Bosik 1997). It is only mentioned here as the junior author still sees Pharaoh’s ant on the Web and in industry publications.

Monomorium pharaonis (Linnaeus) has been carried by commerce to all inhabited regions of the earth. In colder climates, it has become established in heated buildings.

The workers of Monomorium pharaonis (L.) while monomorphic (same size), do vary slightly in length and are approximately 1.5 to 2 mm long. The antennae have 12 segments with each segment of the 3-segmented antennal clubs increasing in size toward the apex of the club. The eye is comparatively small, with approximately six to eight ommatidia across the greatest diameter. The prothorax has subangular shoulders, and the thorax has a well-defined mesoepinotal impression. Erect hairs are sparse on the body, and body pubescence is sparse and closely appressed. The head, thorax, petiole and postpetiole (the petiole, or the petiole and postpetiole, in ants is also called the pedicel are densely (but weakly) punctulate, dull, or subopaque. The clypeus, gaster, and mandibles are shiny. The body color ranges from yellowish or light brown to red with the abdomen often darker to blackish. A stinger is present but is rarely exserted (thrust outward). 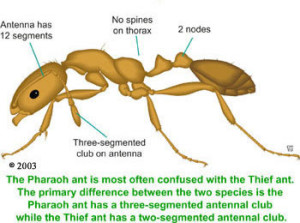 The Pharaoh ant colony consists of queens, males, workers, and immature stages (eggs, larvae, pre-pupae, and pupae). Nesting occurs in inaccessible, warm (80 to 86°F), humid (80%) areas near sources of food and/or water, such as in wall voids. The size of the colony tends to be large but can vary from a few dozen to several thousand or even several hundred thousand individuals. Approximately 38 days are required for development of workers from egg to adult.

Mating takes place in the nest, and no swarms are known to occur. Males and queens usually take 42 days to develop from egg to adult. The males are the same size as the workers (2 mm), are black in color and have straight, not elbowed, antennae. Males are not often found in the colony. The queens are about 4 mm long and are slightly darker than the workers. Queens can produce 400 or more eggs in batches of 10 to 12. Queens can live four to 12 months, while males die within three to five weeks after mating.

Part of the success and persistence of this ant undoubtedly relates to the budding or splitting habits of the colonies. Numerous daughter colonies are produced when a queen and a few workers break off from the mother colony. Even in the absence of a queen, workers can develop a queen from the brood, which is transported from the mother colony. In large colonies there may be as many as several hundred reproductive females.

The Pharaoh ant is a major indoor pest in the Canada. The ant has the ability to survive most conventional household pest control treatments and to establish colonies throughout a building. More than just the food it consumes or spoils, this ant is considered a serious pest simply due to its ability for “getting into things.” Pharaoh ants are reported to have even penetrated the security of recombinant DNA laboratories.

In some areas, this ant has become a major pest of residences, commercial bakeries, factories, office buildings, and hospitals or other areas where food is handled. Infestations in hospitals have become a chronic problem in Canada Europe and the United States. In Texas, Wilson and Booth (1981) reported an extensive infestation throughout a seven-floor medical center. In ant- infested hospitals, burn victims and newborns are subjected to increased risk because the Pharaoh ant can transmit over a dozen pathogens such as Salmonella spp., Staphylococcus spp., and Streptococcus spp. Pharaoh ants have been observed seeking moisture from the mouths of sleeping infants and from in-use IV bottles.

This ant infests almost all areas of a building where food is available and infests many areas where food is not commonly found. Pharaoh ants have a wide preference in the types of food consumed. In infested areas, if sweet, fatty, or oily foods are left uncovered for only a short period of time, one can likely find a trail of Pharaoh ants to the food. As a consequence, they cause much food to be discarded due to contamination.

Workers of the Pharaoh ant can be observed on their feeding trails, often using wiring or hot water pipes to travel through walls and between floors. Once a worker has located a food source, it lays a chemical trail from the food to the nest. These ants are attracted to sweet and fatty foods, which may be used to determine their presence. Pharaoh ants will nest in the oddest places, such as between sheets of stationary, layers of bed linen and clothes, in appliances, or even piles of trash. 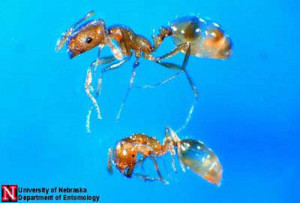 Figure 5. A comparison of the bodies of workers of the Pharaoh ant (top), Monomorium pharaonis (Linnaeus), and the thief ant (bottom), Solenopsis molesta (Say). Photograph by Jim Kalisch, University of Nebraska-Lincoln. 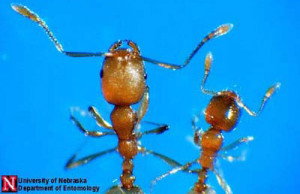 Figure 6. A comparison of the heads of workers of the Pharaoh ant (left), Monomorium pharaonis (Linnaeus), and the thief ant (right), Solenopsis molesta (Say). Photograph by Jim Kalisch, University of Nebraska-Lincoln. 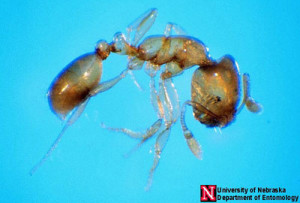 Control of Pharaoh ants is difficult, due to their nesting in inaccessible areas. Treatment must be thorough and complete at all nesting sites, as well as the foraging area. Thus, treatment must include walls, ceilings, floor voids, and electrical wall outlets. Baits are now the preferred method of control for Pharaoh ants and several baits (insecticides) are labeled for indoor ant control. A Pharaoh ant infestation of a multifamily building requires treatment of the entire building to control the infestation. Ants nesting on the outside may be controlled by also using a perimeter barrier treatment (Smith and Whitman 1992).