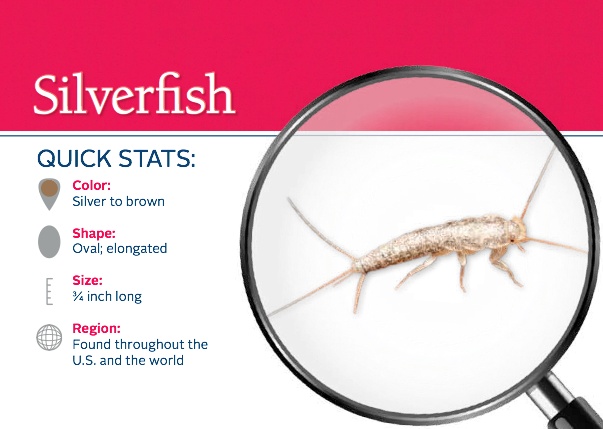 Silverfish can be destructive pests for homeowners and businesses. You can fight back against these insects by learning about their habits, what attracts them and the methods used to eradicate them.

Silverfish, and their look-a-like cousins, firebrats, are insects that can infest a home as they seek out moisture. They maneuver with an undulating movement and have long antennae and three antennae-like tails that help them sense their environment. Silverfish are nocturnal and quickly move to protected areas, usually cracks and crevices, when surprised.

Though harmless to humans and pets, silverfish can pose a threat to your belongings as they seek out starches to eat. 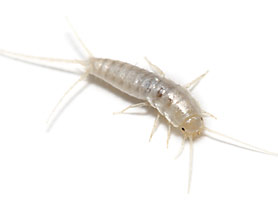 Silverfish are usually attracted to an area that provides them with moisture, so you will often see them in a bathroom, basement or kitchen. They especially tend to congregate around plumbing fixtures where they can access leaky pipes or those covered in condensation. It’s not uncommon for them to crawl out of shower and sink drains. They may also be found in humid attics.

Beyond seeking out moisture, silverfish will be on the hunt for something to eat, and seem most attracted to starches, proteins and sugars. This diet can be problematic for homeowners, since they are known to destroy books, paper, glue and fabrics as they feed.

Are Silverfish Harmful to People or Pets?

The silverfish bug is not known to bite humans or pets, nor do they spread disease.

While they don’t attack people or pets, silverfish do feed on the skin cells and hair follicles we shed.

Some people have allergies to silverfish. Since silverfish molt and shed their scales, the particles produced by this action can mix with dust and trigger an allergic reaction. One study found that reducing the number of such allergy-inducing particles is quite difficult. The same study claimed that these allergens are even present in houses where silverfish haven’t been observed. 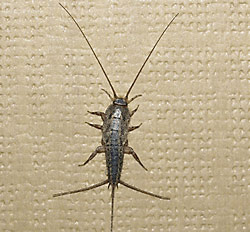 Silverfish earn their name for their silvery sheen and their fish-like movements. They have a carrot-shaped body with two antennae at their head. They also have three tail-like appendages growing from the last segment on their body. The mouth of the silverfish is small, and they do not bite or sting people.

Like most insects, these inch-long pests have six legs and are quite speedy when they are alarmed. However, it should be noted that silverfish are only fast when on a horizontal surface – they are slow and somewhat ineffective climbers. In fact, they cannot climb up smooth surfaces such as a sink basin or bathtub.

After an oddly complex mating ritual involving dances and chases, female silverfish lay eggs that hatch in 19 to 45 days.

Young silverfish nymphs, which are white in color, take three to four months to reach adulthood. With a high birth rate and quick reproductive maturation, silverfish populations can swell quickly.

Silverfish bugs molt regularly throughout their lives, and they often live for a little more than three years.

What Do Silverfish Eat

Though silverfish will eat protein-rich foods, carbohydrates in the forms of sugars and starches are definitely preferred. In human dwellings, they do the most damage by eating glues and pastes. This leads to damage to wallpaper, book bindings, paper and boxes. They also are known to eat a variety of textiles, including starched cotton, linen and silk. Human foods are also common targets for silverfish, including cereals, coffee, powdered sugar and flour. In a natural setting, silverfish seek out starches and sugars from plants.

Protein is often provided by scavenging sustenance from dead insects. They have even been known to cannibalize other dead or injured silverfish.