Do you notice insects in your kitchen? Then you will want to read this!!

> Blog > Updates > Do you notice insects in your kitchen? Then you will want to read this!! 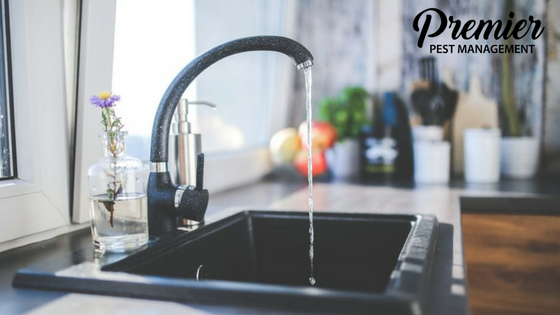 The kitchen can be a haven for insect pests.

How those pests arrive is varied and unpredictable. They may arrive in the corrugations of a cardboard box or in a bag of flour. They may arrive on wing or by hitching a ride in some item brought into the kitchen. They may arrive as an egg on the side of a container or inside a bag, any time of the year.

The best way to control kitchen insects is to prevent them from entering the kitchen or becoming a problem once in the kitchen. More on this later. First, which insects are commonly found in the kitchen? The ones that turn up most are saw-toothed grain beetles, flour beetles and the Indian-meal moth. They are other insects such as the cockroach, larder beetle and carpet beetle, which turn up in the kitchen but they also inhabit other areas of the house.

They get their common name from the saw-toothed looking edges on the top body area between their head and their abdomen (thorax). There are two separate species of this insect: the merchant grain beetle and saw-toothed grain beetle. These insects will infest virtually any product in the kitchen, whether it is packaged or left as food debris on shelves or counters. The adult is a reddish-brown beetle that is slender and somewhat flattened. It is about 2-3 mm in length and about 1/2 mm in width. These beetles can penetrate packaged foods readily except for tinfoil-packaged foods. Eggs are laid in or near food, hatch in 3-17 days in heated areas, and the larvae will pupate to an adult in 3-6 weeks. The adult reportedly can live up to three years.

There are also two species of flour beetle: the red flour beetle and the confused flour beetle. The red flour beetle is more commonly found in rural areas associated with grain storage or around country elevators, whereas the confused flour beetle is found mainly in flour but it does infest most other products in the kitchen. They are a shiny, reddish-brown, flattened insect about 3 mm in length and about 3/4 to 1 mm in width. Slight differences in antennae and thorax shape differentiate the two insects. The adult may live as long as 1-3 years. Their life cycle from egg through larvae, pupa and adult takes from 7 weeks to several months, depending on temperature and the food source. Like the grain beetle, their flattened body and small size allows them to enter most products that are not well sealed or in a strong package.

This moth is often mistaken for a clothes moth. It can be distinguished by wing markings. The wings of an Indian-meal moth are metallic reddish-brown on the outer two-thirds and creamy-grey on the inner third. The larvae is about 13 mm long, usually dirty-white but sometimes tinted green or pink. Larvae leave a trail of silk wherever they crawl. They will completely infest the food product they are in with a mat of silk. When you see the larvae crawling in the cupboard or on the ceiling, they are usually looking for a place to pupate. They infest most foods in a kitchen but are characteristically known to infest dried fruits. Of the other foods, coarse grain are usually infested instead of finely milled grains. Their life cycle varies with food and temperature from five weeks to nearly a year.

Prevention is the best control. Vacuum up crumbs and clean shelves of spilled food frequently. If some eggs do hatch and there is no food, the larvae dies.

You may inadvertently bring food pests into your home in the foot products you buy. Don’t give them a chance to move to any other part of the kitchen. Seal them inside a container which they can not escape from. Use air-tight containers such as mason jars with rubber rings and metal ring caps. A “Tupperware” type container is the next best container to use, as long as it is airtight. Find containers for all grain-based products in the kitchen, including four. Store larger bags of flour in a garage or some outside, cool location. The insects will develop slowly in the cool temperatures; this will give you time to control the problem. Put products you suspect may be infested in the freezer at the lowest setting for 3-5 days if they are freezable.

For infestations, begin control by a thorough cleanup of the whole kitchen area: behind the stove and fridge, cupboards, shelves, drawers, breadboards, baseboards and all cracks and crevices. Use the vacuum cleaner first and then follow with a washing of all surfaces to get any crumbs and possible eggs laid by the insects. Use any kitchen cleaner. If they are adult insects you want to kill use a household “Raid” type product and wipe the surface areas with soap and water after spraying. Overall,. Control of insects in your home is best achieve by frequent and thorough cleanings, along with the continued use of sealed containers.